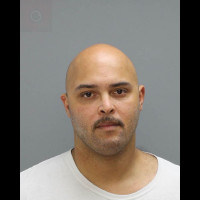 On September 19, 2021 at 10:06 p.m., the Lower Allen Township Police Department was dispatched to Walmart, 3400 Hartzdale Drive, with reference to non-active retail thefts. Video revealed that on September 16 at around 6:45 p.m., the suspect took the following items without paying for them:

The suspect exited the store without paying for the merchandise and entered a red Chrysler minivan with a PA registration, which returned to an address in Harrisburg, PA.

During a follow-up investigation, the van was located in the parking lot of the apartment complex at the address of the registered owner. A man, later identified as Thomas Leon Davis III, was observed walking away from the vehicle. Davis pulled over and spoke with vehicle officers. Davis was made aware of the vehicles’ involvement in a retail theft and how he looked like the suspect. Davis was shown a Walmart CCTV photograph of the incident and admitted “it’s my bald head.”

In another conversation, Davis admitted to stealing from Walmart and informed officers that he had been sent there with a list of items to steal. He recovered one of the items stolen from inside the van and returned it to the officers.

Charges have been filed and an arrest warrant has been obtained.